Sage Steele is an American television anchor, best known as the lead host of SportsCenter On The Road. Previously, she hosted the Saturday and Sunday editions of NBA Countdown on ABC for four seasons. During hear early days at ESPN, she worked on ET edition of SportsCenter. She contributed to the sports talk show Mike & Mike in the Morning with Mike Greenberg and Mike Golic. Born Sage Marie Steele on November 28, 1972, in Panama, to parents Mona and Gary Steele, she has two brothers named Courtney and Chad. After graduating from Carmel High School in 1990, she attended and graduated from Indiana University Bloomington in 1995 with a Bachelor of Science degree in sports communication. She has been married to Jonathan Bailey since October 30, 1999. She has three kids: Quinn, Nicholas, and Evan. 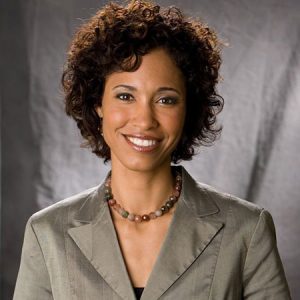 Sage Steele Facts:
*She was born on November 28, 1972 in Panama.
*Her father was the first African-American to play varsity football at West Point.
*Her first job was at Dairy Queen.
*She was the host of the weekend show NBA Countdown.
*She co-hosted the Miss America 2017 pageant with Chris Harrison.
*She drove the pace car for the NASCAR Sprint Cup Series Brickyard 400 in 2013.
*Follow her on Twitter, Facebook and Instagram.