Kristen Gutoskie is a Canadian actress. She is best known for television roles as Katie Frank on Containment, Rachael on Beaver Falls, Pembrooke on Relationship Status, Molly Hendricks on Lethal Weapon and Seline in The Vampire Diaries. Gutoskie’s other notable television works include System Crash, Originals, Republic of Doyle, The Handmaid’s Tale, and Chicago Fire. She has also appeared in the films Moon Point, That’s So Relatable: Soon or Later, and The Dust Storm. Born on June 6, 1988 in Toronto, Canada, to parents Linda, a nurse, and Bob, a computer salesman, she was raised in Markham, Ontario. She has an older sister named Shauna. Gutoskie studied acting at Wilfrid Laurier University and has trained at The Second City. 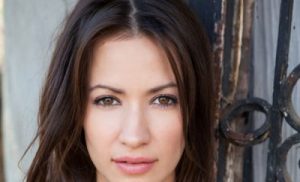 Kristen Gutoskie Facts:
*She was born on June 6, 1988 in Toronto, Canada.
*She started her acting career in her early teens, appearing in commercials as well as in TV movies and shows.
*She wrote and performed songs in both Containment (2016) and The Dust Storm (2016).
*She spends her free time mentoring youth for Good City Mentors and playing music for kids with Art of Elysium.
*She has a pet bulldog named Carl.
*Visit her official website: www.kristengutoskie.com
*Follow her on Twitter, YouTube, Facebook and Instagram.