Kristen McMenamy is an American model who worked for many of the world’s top designers and international fashion houses, such as Versace, Giorgio Armani, Valentino, Todd Oldham, Jean Paul Gaultier, Gianfranco Ferré, Lanvin, Isaac Mizrahi, Christian Dior, Sonia Rykiel, Dolce & Gabbana, Yohji Yamamoto, Thierry Mugler, Comme des Garçons, Chloé, and Moschino. One of the world’s top fashion models of the 1990s, McMenamy has appeared on the covers of numerous fashion magazines, including Vogue, Harper’s Bazaar, Vanity Fair, People, Interview, Elle, V, Dazed & Confused, LOVE, i-D, The Face, W, Women’s Wear Daily, and Newsweek. Born on December 12, 1964 in Easton, Pennsylvania, in an Irish-American Roman Catholic family, she is the third of seven children. She was educated at Notre Dame High School. She was married to Miles Aldridge from 1997 to 2013. In June 2016, she married art dealer Ivor Braka. She had a daughter, Lily McMenamy, with Hubert Boukobza, the owner of the Parisian nightclub Les Bains Douches. 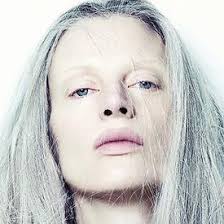 Kristen McMenamy Facts:
*She was born on December 12, 1964 in Easton, Pennsylvania, USA.
*She is the ex-daughter-in-law of Alan Aldridge, and ex-sister-in-law of Lily Aldridge.
*She began her modeling when she was about 20 years old.
*McMenamy appeared in the Pirelli Calendar for 1996 as months February, August, and December.
*She appeared on the cover of Vogue Italia in August 2010.
*She was ranked #21 in Channel 5’s “World’s greatest supermodel”.
*Follow her on Instagram.