Marwan Kenzari is a Dutch actor who appears in Dutch and English language films. Kenzari is best known for his powerful and brooding performance in the 2013 Dutch crime drama Wolf, for which he won the Golden Calf for Best Actor at the Netherlands Film Festival in 2013. His other notable film appearances include: Collide, Ben-Hur, What Happened to Monday, The Angel, and Aladdin. His television credits include Flikken Maastricht, Van God Los, and Penoza. Born on January 16, 1983 in The Hague, Zuid-Holland, Netherlands, to a Tunisian family, he began acting as a teenager after a girl he was dating signed the two of them up to audition for a Dutch version of the musical Chicago. 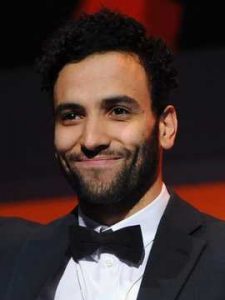 Marwan Kenzari Facts:
*He was born on January 16, 1983 in The Hague, Zuid-Holland, Netherlands.
*He is of Tunisian descent.
*He is fluent in Arabic, Dutch, French and English.
*He began his acting career when he was a teenager.
*He made his screen debut in 2008 with the film Katia’s Sister.
*He graduated from the prestigious Theatre Academy Maastricht.
*He won a Golden Calf for Best Actor at the Netherlands Film Festival for his role in the Dutch crime drama Wolf in 2013.
*Visit his official website: www.marwankenzari.nl
*Follow him on Twitter.