Sean Patrick Flanery is an American actor known for his portrayals of Connor MacManus in The Boondock Saints and its sequel The Boondock Saints II: All Saints Day, Greg Stillson in the USA Network television series The Dead Zone, Jeremy “Powder” Reed in Powder, Indiana Jones in the ABC television series The Young Indiana Jones Chronicles, as well as Bobby Dagen in Saw: The Final Chapter. He is also notable for his role as Sam Gibson on the CBS soap opera The Young and the Restless in 2011. Born on October 11, 1965 in Lake Charles, Louisiana, to parents Paul and Genie Flanery, he was raised in a small town outside of Houston, Texas. Flanery was educated at Dulles High School in Sugar Land, and attended the University of St. Thomas in Houston. He is married to Playboy model and actress Lauren Michelle Hill with whom he has two sons, Charlie and Porter. He has a daughter from a previous relationship – Lola Flanery, who is also an actress. 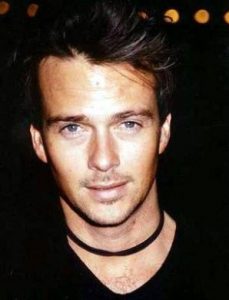 Sean Patrick Flanery Facts:
*Born on October 11, 1965 in Lake Charles, Louisiana, he is of Irish, French, and English descent.
*He started acting in college after he joined an acting class to meet a girl on whom he had a crush.
*He studied Brazilian Jiu-Jitsu and Karate and earned a black belt in both disciplines.
*He won the 1997 Toyota Pro-Celebrity Race at the Toyota Grand Prix of Long Beach as the celebrity driver; the “Alfonso Ribeiro rule” forced him to “defend” his title as a professional driver under TGPLB rules, and he won the 1998 race as a professional driver.
*He published his first novel, Jane Two, a coming-of-age story drawing inspiration from his own childhood and early experiences in 2016.
*He has a dog named Donut.
*Visit his official website: www.seanflanery.com
*Follow him on Twitter, Facebook and Instagram.