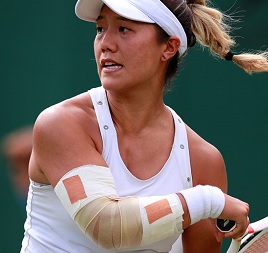 Kristie Ahn is an American professional tennis player of Korean descent. She achieved a career-high singles ranking of World No. 87 on September 30, 2019, and a doubles ranking of world No. 199 on April 24, 2017. Having turned professional in 2008, Ahn has won seven singles titles and two doubles titles on the ITF Circuit.

Kristie Ahn Facts:
*She was born on June 15, 1992 in Flushing, New York, USA.
*She is of Korean descent.
*She turned professional in 2008.
*She graduated from Stanford University in 2014 with a degree in Science, Technology and Society.
*She plays right-handed and has a two-handed backhand.
*Her first appearance at a Grand Slam tournament was at the age of 16 at the 2008 US Open.
*She has a career-high singles ranking of No. 87.
*Follow her on Twitter.