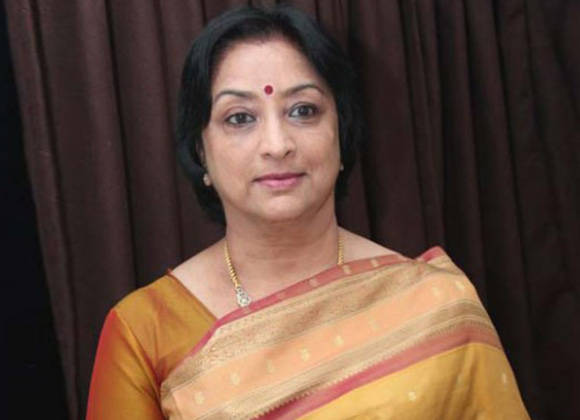 Born Yaragudipati Venkata Mahalakshmi on December 13, 1952 in Chennai, India, into a South Indian Hindu Brahmin family, her mother Kumari Rukmini was a Tamil actress. her father, Yaragudipati Varada Rao, was a from a Telugu speaking family.

Lakshmi was married three times. Her first marriage was to Baskar, which was arranged by her parents when she was seventeen. Her only biological child, Aishwarya, was born in 1971. Her marriage ended in divorce, and she gained custody of her daughter, who later became an actress in the 1990s, carrying on the family tradition. Lakshmi fell in love with her _Chattakkari (1974)_ leading man Mohan, but that relationship ended. While she was shooting En Uyir Kannamma (1988), she and actor-director K.S. Sivachandran fell in love and got married. She adopted a baby girl in 2001.

Lakshmi Facts:
*She was born on December 13, 1952 in Chennai, India.
*She made her film debut through a Tamil film Sri Valli in 1961.
*Her debut as an actress happened with the Tamil film Jeevanaamsam in 1968.
*In 1968, Lakshmi debuted in Kannada and Telugu films with Goa Dalli CID 999 and Bandhavyalu, respectively.
*Her debut Malayalam film, Chattakari (1974) went on to become a blockbuster throughout India.
*She made her Bollywood debut in 1975, with the woman-centric Julie, the remake of Malayalam film Chattakkari.