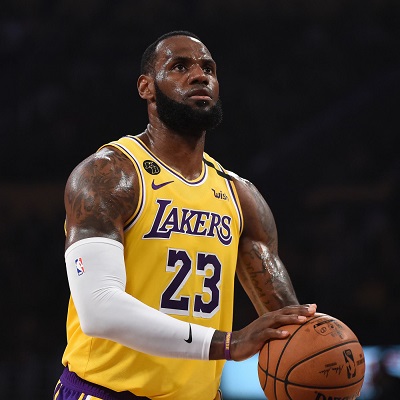 LeBron James is an American professional basketball player who plays for the Los Angeles Lakers of the National Basketball Association (NBA). Widely regarded as one of the greatest basketball players in NBA history, James is frequently compared to Michael Jordan in debates over the greatest basketball player ever. He is the only player to have won NBA championships with three franchises (the Cleveland Cavaliers, the Miami Heat, and the Lakers) as NBA Finals MVP, and has competed in ten NBA Finals, eight of them consecutively with the Heat and the Cavaliers from 2011 to 2018. His accomplishments include four NBA championships, four NBA MVP awards, four NBA Finals MVP awards, and two Olympic gold medals.

LeBron James Facts:
*He was born on December 30, 1984 in Akron, Ohio, USA.
*He went to high school in Akron, Ohio.
*He was the first overall pick of the 2003 NBA draft, and won the 2004 NBA Rookie of the Year Award.
*He spent seven years in Cleveland, then four years in Miami.
*He won his first two championships with the Miami Heat in 2012 and 2013.
*Forbes magazine named him “Most Powerful Athlete” in 2014.
*He is friends with Dwyane Wade.
*He has a tattoo on his arm, of his mother Gloria.
*He is longtime friend with Maverick Carter.
*He is the owner of a film production company called SpringHill Company.
*Visit his official website: www.lebronjames.com
*Follow him on Twitter, Facebook, YouTube and Instagram.