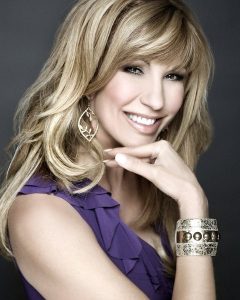 Leeza Gibbons was born on March 26, 1957 in Hartsville, South Carolina, USA as Leeza Kim Gibbons to Jean and Carlos Gibbons. She is an American talk show host, best known as a correspondent and co-host for Entertainment Tonight (1984-1995) as well as for having her own syndicated daytime talk show, Leeza (1993-2000). She has been married to Steve Fenton since April 20, 2011. She was previously married to Stephen Meadows, Chris Quinten and John Hicks.