Leslie Nielsen was a Canadian-American actor, comedian and producer who appeared in more than 100 films and 150 television programs, playing more than 220 characters. Best remembered by the public for his roles in the films Airplane! and The Naked Gun trilogy: The Naked Gun: From the Files of Police Squad!, The Naked Gun 2 1/2: The Smell of Fear and Naked Gun 33 1/3: The Final Insult. His television roles include Forbidden Planet and Police Squad!. Born Leslie William Nielsen on February 11, 1926 in Regina, Canada, his father, Ingvard Eversen Nielsen, was a Danish-born constable in the Royal Canadian Mounted Police, and his mother, Mabel Elizabeth, was an immigrant from Wales. His elder, Erik Nielsen (1924–2008) became the Deputy Prime Minister of Canada. Nielsen studied at the Academy of Radio Arts in Toronto before moving on to New York’s Neighborhood Playhouse. He married four times: to nightclub singer Monica Boyar, Alisande Ullman, Brooks Oliver, and Barbaree Earl. Nielsen had two daughters from his second marriage, Maura and Thea Nielsen. Nielsen died at age 84 of pneumonia on November 28, 2010. He was buried at Evergreen Cemetery in Fort Lauderdale, Florida. 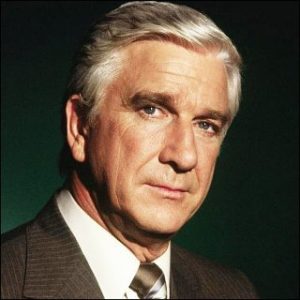 Leslie Nielsen Facts:
*He was born on February 11, 1926 in Regina, Canada.
*He was the middle child of three, with an older brother named Erik and younger brother named Gilbert.
*He joined the Royal Canadian Air Force at age 17.
*He worked as a DJ and won a scholarship to attend the Neighborhood Playhouse.
*He portrayed more than 200 characters over a prolific television and film career.
*He frequently worked with Jim Abrahams and the Zucker Brothers.
*He was appointed Officer of the Order of Canada (OC) in recognition of his contributions to the film and television industries. (October 10, 2002)