Lia Marie Johnson is an American singer-songwriter, actress and Internet personality, best known for appearing in the Emmy-winning web series Kids React, and for her own vlogging and social media output. She also starred in the Nickelodeon movie Terry the Tomboy and had recurring roles in AwesomenessTV’s Side Effects TV Series and My Music. She also appeared in The Unit and Tim and Eric Awesome Show, Great Job! and in 2014, she portrayed a role in the Cameron Dallas film Expelled. Born on November 23, 1996 in Wahiawa, Hawaii, she is the oldest child in her family. She dated web phenom Jc Caylen from 2014 to 2016. 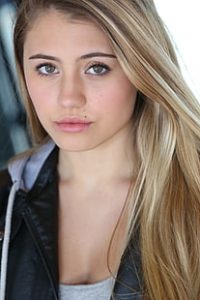 Lia Marie Johnson Facts:
*She was born on November 23, 1996 in Wahiawa, Hawaii, into a military family.
*She has one younger brother and four younger sisters.
*She made her TV debut at age 12 in the 2008 series When Weather Changed History.
*She was selected one of the Top 100 YouTubers in the world in 2015.
*She was a founding member of the teen band Pink Army.
*She created her YouTube account in 2007.
*She is a Democrat.
*Follow her on Twitter, YouTube, Facebook and Instagram.