Traci Lords is an American actress, singer, writer, director and producer, known mostly for her roles on the television series MacGyver, Married… with Children, Melrose Place, Profiler, First Wave, Tales from the Crypt, Roseanne, Gilmore Girls and Will & Grace. She has also appeared in such films as Skinner, Virtuosity, Blade, Zack and Miri Make a P*rno, and 2012’s Excision, for which she won a Fangoria Chainsaw Award for Best Supporting Actress as well as a Fright Meter Award and a CinEuphoria Award. As a singer, she has released one studio album, one extended play, one compilation album, three singles, three promotional singles and four music videos. She released her debut single, “Control”, in 1995, which peaked at #2 on the Billboard Hot Dance Club Songs and #82 on the UK Singles Chart. Born Nora Louise Kuzma on May 7, 1968 in Steubenville, Ohio, to Patricia Louise and Louis Kuzma, she is of Czech, Slovak, and Ukrainian descent on her father’s side, and of English, Scottish, and German descent on her mother’s side. Her parents divorced when she was just seven years old. Lords appeared in dozens of adult films between 1984 and 1986 while she was underage. She has been married to Jeff Gruenewald since February 23, 2002. She was previously married to Ryan Granger from 1999 to 2000 and Brook Yeaton from 1990 to 1996. 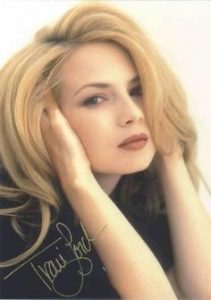 Traci Lords Facts:
*She was born on May 7, 1968 in Steubenville, Ohio.
*Her ancestry includes Czech, Slovak, Ukrainian, English, Scottish, and German.
*She was raped at the age of 10.
*She began her career at the age 15, appearing in dozens of ad*lt films.
*She had her name legally changed to Traci Elizabeth Lords.
*She was the Penthouse Pet of the Month for September 1984.
*She has 1st KYU in Bujinkan Ninjutsu.
*She is friends with John Tierney.
*Visit her official website: www.tracilords.com
*Follow her on Twitter, Facebook and Instagram.