Lily James is a British actress and singer who has performed on stage, film, and television. She is best known for her role as Lady Rose McClare in the television series Downton Abbey (2012–2015). She played the titular character in the 2015 feature film Cinderella. Lily’s other notable works include Romeo and Juliet, Just William, Wrath of the Titans, Fast Girls, War & Peace, Secret Diary of a Call Girl, and Mamma Mia! Here We Go Again. Born Lily Chloe Ninette Thomson on April 5, 1989 in Esher, United Kingdom, to parents Ninette and Jamie Thomson, she has two brothers, one younger and one older. Lily was educated at Arts Educational School in Tring and studied acting at the Guildhall School of Music and Drama in London, graduating in 2010. She began her acting career in the British television series Just William. She was in a relationship with Dr. Who and The Crown actor Matt Smith from 2014 to 2019. 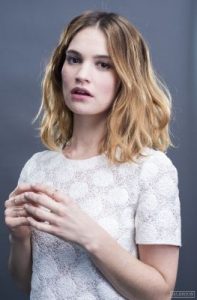 Lily James Facts:
*She was born on April 5, 1989 in Esher, United Kingdom.
*Her paternal grandmother was American actress Helen Horton.
*Her father, James Thomson, died from cancer in 2008.
*She graduated from London’s famous Guildhall School of Music and Drama in 2010.
*She played Lady Rose McClare in the television drama series Downton Abbey.
*She took her father’s given name as her stage name when she learned there was already an actress named Lily Thomson.
*She is a mezzo-soprano.
*She has been named as the next Keira Knightley.
*Follow her on Facebook and Instagram.