Lily-Rose Depp is a French-American actress and model, best known as the daughter of American actor, producer, and musician Johnny Depp and French singer, actress, and model Vanessa Paradis. Lily began her acting career with a cameo role in Tusk, and co-starred in Rebecca Zlotowski’s Planetarium and The King, directed by David Michôd. Born Lily-Rose Melody Depp on 27 May, 1999 in Paris, France, to Hollywood icon Johnny Depp and French icon, Vanessa Paradis, she has one younger brother named Jack. She is of English, Irish, Scottish, Welsh, French, Belgian, German and Dutch descent on her father’s side, and of French descent on her mother’s side. In 2018, she began dating American actor Timothée Chalamet. 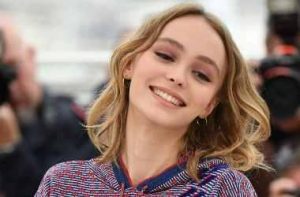 Lily-Rose Depp Education:
She dropped out of high school to pursue modeling and acting career.

Lily-Rose Depp Facts:
*She was born on 27 May, 1999 in Paris, France.
*She appeared with her father in the 2015 feature film Yoga Hosers.
*She holds French and American citizenship and can speak fluent English and French.
*She is good friends with Harley Quinn Smith (daughter of director/filmmaker Kevin Smith).
*Johnny Depp has got her name tattooed on his chest over his heart.
*She is the goddaughter of singer Marilyn Manson.
*Follow her on Instagram.