Lindsay Lohan is an American actress and singer who began her career as a child actor in the late 1990s. She has starred in such films as The Parent Trap, Mean Girls, Herbie: Fully Loaded, Life-Size, Get A Clue, Freaky Friday, Confessions of a Drama Queen, Herbie Fully Loaded, Just My Luck, Georgia Rule and Labor Pains. Her 2004 debut album “Speak” was certified for platinum sales in the United States. Born Lindsay Dee Lohan on July 2, 1986 in The Bronx, New York City, New York, to parents Dina and Michael Lohan, she is of German, Irish and Italian descent on her father’s side, and of Irish and Italian descent on her mother’s side. Her siblings are Cody, Ali, Ashley, Michael and Landon. Lohan began her professional career as a Ford model at age 3. She made her acting debut in 1996 as the third actress to play Ali Fowler in the television drama Another World. From 2008 to 2009, she was in a relationship with Samantha Ronson. 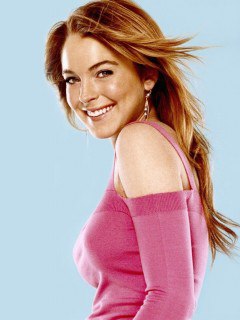 Lindsay Lohan Facts:
*She was born on July 2, 1986 in The Bronx, New York City, New York, USA.
*She is the eldest child of Michael and Dina Lohan.
*She started modeling at age 3.
*She made her motion picture debut in Disney’s 1998 remake of The Parent Trap.
*Her debut album, Speak, peaked at number 4 on the Billboard 200.
*People Magazine named her one of the top 50 Most Beautiful People in the World in 2004.
*She is friends with Victor Formosa and good friends with Jessica Alba, Amanda Seyfried and Nathan Folks.
*Visit her official website: www.lindsaylohanofficial.com
*Follow her on Twitter, YouTube, Facebook and Instagram.