Lola Glaudini is an American actress. She is best known for her roles as Elle Greenaway in the CBS crime drama series Criminal Minds, and Deborah Ciccerone-Waldrup in the HBO series The Sopranos. Glaudini’s other notable works include Invincible, Blow, NYPD Blue, Persons Unknown, The Handler, The Expanse, Agents of S.H.I.E.L.D., and Ray Donovan. Born Lola Luna Glaudini on November 24, 1971 in New York City, New York, USA, to parents Nina Diane and Robert Glaudini, she is of Italian descent on her father’s side, and her mother is from a Jewish family. She was educated at Bard College. She made her film debut in Without a Map (1996). She has been married to Stuart England since 2005. They have two sons, Valentino and Montaigne. 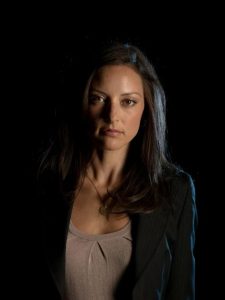 Lola Glaudini Facts:
*She was born on November 24, 1971 in New York City, New York, USA.
*She is of Italian and Jewish descent.
*She made her acting debut at age 25 in the 1996 film Without a Map.
*Entertainment Weekly magazine named her one of the 100 Most Creative People in Entertainment in 2000.
*She was appeared on the cover of Vogue magazine in June 2006.
*Follow her on Twitter and Instagram.