Mark Consuelos is an American-Spanish actor. He is best known for his roles as Mateo Santos in the ABC soap opera All My Children and Hiram Lodge in The CW television series Riverdale. He had a recurring role on the FX series American Horror Story: Asylum. The youngest of three children, Consuelos was born Mark Andrew Consuelos in Zaragoza, Aragón, Spain, to Mexican father, Saul, and Italian mother, Camilla, and was raised in both Lebanon, Illinois and Tampa, Florida. After graduating from Bloomingdale High School, he attended the University of Notre Dame before transferring to and graduating from the University of South Florida with a degree in marketing in 1994. He used to work as a male exotic dancer at a club called “Stingers” in the mid-90s in the Tampa Bay area in Florida before breaking out as an actor on All My Children. In 1996, he married American actress, dancer, talk show host, and television producer Kelly Ripa. They have three children, Michael Joseph (b. June 2, 1997), Lola Grace (b. June 16, 2001), and Joaquin Antonio (b. February 24, 2003). 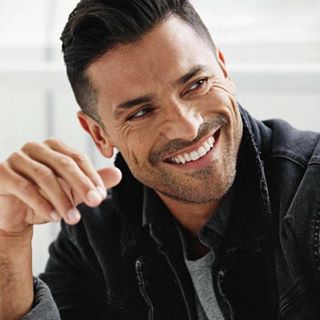 Mark Consuelos Facts:
*He was born on March 30, 1971 in Zaragoza, Aragón, Spain.
*Growing up, he learned English by watching American television.
*He landed his breakthrough role on the soap opera All My Children in 1995.
*In 2018, Consuelos won the Teen’s Choice Award for Choice TV Villain.
*He is a huge fan of the New York Jets.
*Although he was born in Spain, he does not speak Spanish but fluent in Italian.
*Follow him on Instagram.