Louis C.K. is an American comedian, actor, writer, producer, director, and editor, best known for the Emmy-winning FX series Louie. Among his awards, he won a Peabody Award in 2012 and has received six Primetime Emmy Awards, as well as numerous awards for The Chris Rock Show, Louie, and his stand-up specials Live at the Beacon Theater and Oh My God. He hosted Saturday Night Live on November 3, 2012 and was subsequently Primetime Emmy Award-nominated for Outstanding Guest Actor in a Comedy Series. Born Louis Székely on September 12, 1967 in Washington, D.C., his father, Luis Szekely, was an economist and his mother, Mary Louise, was a computer programmer. He graduated from Newton North High School in 1985. Louis began his career performing stand-up while simultaneously making short films. At age 17, he directed a comedic short film titled Trash Day (1984). He was married to Alix Bailey from 1995 to 2008. They have two daughters. In 2018, he dating French comedian Blanche Gardin. 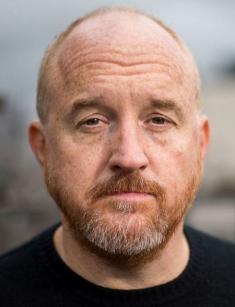 Louis C.K. Facts:
*He was born on September 12, 1967 in Washington, D.C., USA.
*He learned to speak Spanish while living in Mexico City.
*He used to work as an auto mechanic before beginning his career in stand-up comedy.
*He won two Emmy Awards between in 1999 and 2012.
*He has dual American and Mexican citizenship.
*He cites comedians George Carlin, Woody Allen, Larry David, Joan Rivers, Robin Williams, Steve Martin, Richard Pryor and Bill Cosby as his biggest influences.
*He is a big fan of Miles Davis.
*He was roommates with Marc Maron early in their careers.
*Visit his official website: www.louisck.com
*Follow him on Twitter and Instagram.