Luke Evans is a Welsh actor and singer. He is best known for his roles in the films Clash of the Titans, Immortals, Beauty and the Beast, The Three Musketeers, Fast & Furious 6, Ma and Peter Jackson’s The Hobbit trilogy. In 2018, Evans starred as newspaper illustrator John Moore in TNT drama The Alienist, and released his debut studio album, At Last, on November 22, 2019. In 2020, he starred as Steve Wilkins in a three-part miniseries The Pembrokeshire Murders. 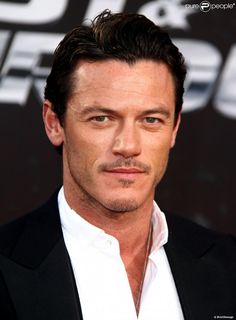 Born Luke George Evans on April 15, 1979 in Pontypool, United Kingdom, to parents Yvonne and David Evans, Luke is an only child. He began his acting career in the London Stage productions of Avenue Q, Rent and Miss Saigon. In 2019, he began dating Rafael Olarra. He was previously in a relationship with model Jon Kortajarena.

Luke Evans Facts:
*Born on April 15, 1979 in Pontypool, United Kingdom, he grew up in Aberbargoed.
*He started his career on the stage, and performed in Rent, Piaf, and Miss Saigon.
*He made his film breakthrough in the Clash of the Titans 2010 remake.
*He refers to his fans as the Luketeers from the “Three Musketeers”.
*He is openly gay.
*In December 2020, Luke was named as Attitude Magazine‘s Man of the Year.
*He has a bird tattoo on his upper right leg which he got in 2021.
*Visit his official website: www.lukeevansofficial.com
*Follow him on Twitter, Facebook, YouTube and Instagram.