Richard Cadell is a British illusionist, puppeteer, screenwriter, and TV presenter. He is mainly known for being the in-vision presenter and the hand of puppet Sooty since succeeding Matthew Corbett in 1998. He is a Gold Star Member of the Inner Magic Circle and Past President of the British section of International Brotherhood of Magicians. 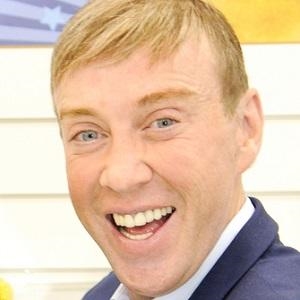 Born on March 23, 1969 in Leicester, United Kingdom, he has a sister, Hollyoaks actress Helen Pearson, and a brother, David Cadell.

Richard Cadell Facts:
*He was born on March 23, 1969 in Leicester, United Kingdom.
*He guest starred in an episode of The Sooty Show when he was only fifteen years old.
*He co-presented the series Sooty Heights with Liana Bridges and then the series just titled Sooty.
*In 2008, he bought the rights to Sooty from HiT Entertainment.
*He is the current voice of Kipper the Cat, Butch, and Ramsbottom.
*He provided the voice of the announcer at the go-kart race in the episode, The Great Race.
*Visit his official website: www.thesootyshow.co.uk