Tahj Mowry is an American actor and singer who is the younger brother of identical twins Tamera and Tia Mowry. He is best known for his portrayal of T.J. Henderson, a child prodigy, on the sitcom Smart Guy, and for his role as Tucker Dobbs on the ABC Family sitcom Baby Daddy. He also played Teddy on the sitcom Full House, and was the voice of Wade on the Disney Channel cartoon Kim Possible. Mowry released his debut single called “Flirt” produced by Excel Beats in April 2015. 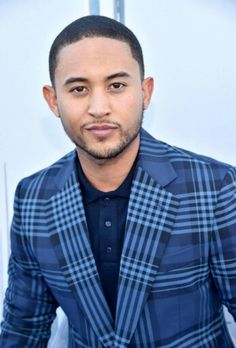 Born Tahj Dayton Mowry on May 17, 1987 in Honolulu, Hawaii, his father, Timothy Mowry, is English-American and his mother, Darlene Mowry, is Bahamian-American. In addition to Tamera and Tia, he has a younger brother, Tavior Mowry. Tahj attended Welby Way Elementary School in West Hills, California. He dated Glee actress Naya Rivera for four years between 2000 to 2004 when they were teenagers.

Tahj Mowry Facts:
*Born on May 17, 1987 in Honolulu, Hawaii, his parents, Darlene and Tim were in the Army.
*He is of English descent on his father’s side, and of Afro-Bahamian descent on his mother’s side.
*The younger brother of actresses Tia and Tamera Mowry.
*He had his first acting job at age 4 as a guest star on the hit sitcom Who’s the Boss?.
*He played T.J. Henderson in the WB’s sitcom Smart Guy from 1997 to 1999.
*He played varsity football at Westlake High School (California).
*Visit his official website: www.tahjmowryofficial.com
*Follow him on Twitter, Facebook and Instagram.