Mackenzie Foy is an American actress. She is best known for her role as Renesmee Cullen in The Twilight Saga: Breaking Dawn – Part 2, for which she received a Young Artist Award for Best Supporting Young Actress in a Feature Film. Foy played the young Murphy in the 2014 space epic Interstellar, for which she received a Saturn Award for Best Performance by a Younger Actor among other awards nominations. She is also known for her role as Clara in Disney’s The Nutcracker and the Four Realms. She has also done voice work in Ernest & Celestine, The Boxcar Children, and The Little Prince. 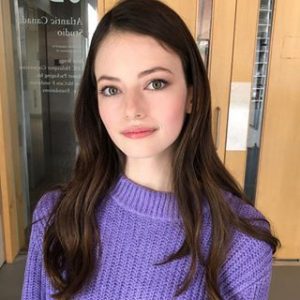 Mackenzie Foy Education:
She was home-schooled alongside her older brother in Los Angeles, California.

Mackenzie Foy Facts:
*She was born on November 10, 2000 in Los Angeles, California, USA.
*Her parents are Giorgina Karrie Foy and Giorgina Karrie Foy.
*She started modeling at age 3.
*She holds a black belt in Taekwondo.
*She has two pets: a dog named FireFly, and a cat named Luna.
*She is good friends with Taylor Lautner.
*Follow her on Twitter, Facebook and Instagram.