Danish actor who played the main antagonist Le Chiffre in the twenty-first James Bond film, Casino Royale. Other notable film roles include Tristan in King Arthur, Kaecilius in Doctor Strange, Galen Erso in Lucasfilm’s Rogue One: A Star Wars Story, Igor Stravinsky in Coco Chanel & Igor Stravinsky, Jacob Petersen in After the Wedding, Johann Friedrich Struensee in A Royal Affair, and Lucas in The Hunt. He also starred as Dr. Hannibal Lecter in General Hospital from 2013 to 2016. Born Mads Dittmann Mikkelsen on November 22, 1965 in Østerbro, Copenhagen, Denmark, to parents Bente Christiansen, a nurse, and Henning Mikkelsen, a bank teller and trade union official, his older brother, Lars Mikkelsen, is also an actor. In his youth, he trained as a gymnast and then became a professional dancer before studying drama at the Armos Theatre School in Denmark. Mikkelsen made his film debut in the film Pusher (1996). In 2000, he married Hanne Jacobsen with whom he has two children, Viola and Carl. 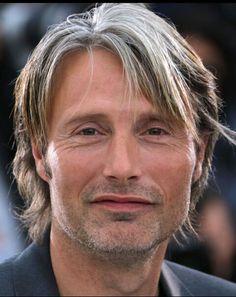 Mads Mikkelsen Facts:
*He was born on November 22, 1965 in Østerbro, Copenhagen, Denmark.
*In his youth, he practiced gymnastics.
*He was a professional dancer for 8 years.
*He made his film debut in the film Pusher (1996).
*He is fluent in Swedish.
*He is very good friends with Hugh Dancy.
*Visit his official website: www.madsmikkelsen.com
*Follow him on Twitter, Facebook and Instagram.