Noah Schnapp is a Canadian-American actor. He is best known for his portrayal of Will Byers in the Netflix series Stranger Things, for which he won a Screen Actors Guild Award for Outstanding Performance by an Ensemble in a Drama Series. Schnapp made his big screen debut in Steven Spielberg’s historical drama film Bridge of Spies (2015), along with Tom Hanks. He also voiced Charlie Brown in The Peanuts Movie (2015). Born Noah Cameron Schnapp on October 3, 2004 in Scarsdale, New York, to parents Karine and Mitchell Schnapp, he has a twin sister named Chloe.  He is of Russian Jewish descent on his father’s side, and of Moroccan Jewish descent on his mother’s side. 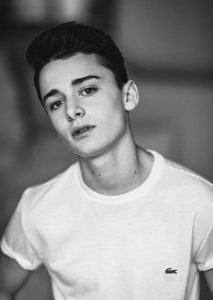 Noah Schnapp Facts:
*He was born on October 3, 2004 in Scarsdale, New York, USA.
*His family is from Montreal, Quebec, Canada.
*His mother is of Moroccan Jewish descent.
*He has a twin sister, Chloe Schnapp.
*He started acting at the age of 6.
*He is best known for playing the role of Will Byers in the Netflix series Stranger Things since 2016.
*He has a dog named Spaghetti.
*Follow him on Twitter, YouTube and Instagram.