Maju Mantilla is a Peruvian actress, model and beauty queen who crowned Miss World 2004 in China, becoming the second winner from Peru. She was Peru’s Triathlon and Pentathlon champion in 2001. Born María Julia Mantilla García on July 10, 1984, in Trujillo, Peru, she is the daughter of Elvia García de and Olmedo Mantilla. She is married to Gustavo Salcedo Ramírez-Gastón with whom she has one son, Gustavo Salcedo Mantilla. 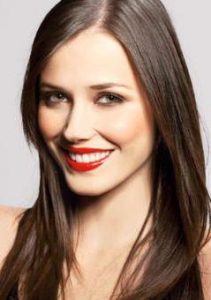 Maju Mantilla Facts:
*She is the younger of two daughters.
*She was the second woman from Peru to be crowned Miss World.
*She is a professional in The Marinera, a typical local dance.
*Her aunt María Julia Mantilla Mayer was crowned Miss World in 1969.
*Follow her on Twitter and Instagram.