Maneet Chauhan is an Indian American chef and television personality who was the Executive Chef of several notable restaurants in Chicago, Nashville, and New York. She is featured as a judge on Chopped on the Food Network, and has appeared on The Next Iron Chef, on The View on ABC, Iron Chef America, the Today show on NBC, and as a judge on the finale of Worst Cooks in America on Food Network. Chauhan wrote her first cookbook titled Flavors of My World: A Culinary Tour Through 25 Countries. 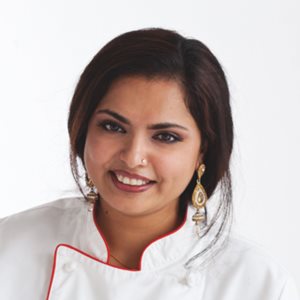 Born on October 27, 1976 in Ludhiana, India, into a Sikh household, Chauhan settled in the United States in her early adulthood years. She earned a degree from India’s WelcomGroup Graduate School of Hotel Administration, and trained at the Culinary Institute of America. She married restauranteur Vivek Deora in 2007. They have two children together.

Maneet Chauhan Facts:
*She was born on October 27, 1976 in Ludhiana, India.
*She began her culinary career at the Manipal University’s WelcomGroup Graduate School of Hotel Administration, Manipal, India.
*She opened a Nashville restaurant called the Chauhan Ale and Masala House in 2014.
*She was invited by President Obama and First Lady Michelle Obama for the Annual Easter Egg Roll Hunt 2014 to the White House.
*She was an invited member of Indiaspora that hosted 100 influential Indian American leaders as part of its first Forum in September 2012.
*Visit her official website: www.maneetchauhan.com
*Follow her on Twitter, Facebook and Instagram.