Marcia Cross is an American television actress best known for her performance as Dr. Kimberly Shaw on Fox soap opera Melrose Place, and Bree Van de Kamp on the ABC comedy-drama series Desperate Housewives. She was born as Marcia Anne Cross on March 25, 1962 in Marlborough, Massachusetts to Janet and Mark Cross. She belongs to English and Irish descent. She has two sisters, Ellen and Susan. She has been married to Tom Mahoney since 2006. They have two children. 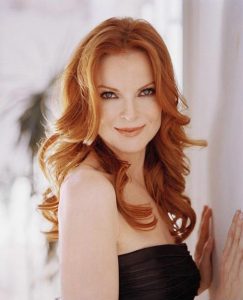 Marcia Cross Facts:
*She has an older sister, Susan and a younger sister, Ellen.
*She began her career in 1984, when she joined the cast of the daytime soap opera The Edge of Night.
*People Magazine named her one of the top 100 Most Beautiful People in the World in 2006 & 2008.
*Her favorite charity is the Panzi Hospital in East Congo.
*She practices yoga with Kelly Rutherford and Lisa Rinna.
*Follow Marcia Cross on Twitter and Facebook.