Poornima Indrajith is an Indian actress, television anchor, talk show host and Fashion Designer who worked in Malayalam and Tamil films. She began her career as a model and then went on to host a music countdown show Pepsi Top Ten on Asianet. She is best known for her roles in the films Randam Bhavam, Valliettan, and Meghamalhar, for which she received the best supporting actress award. Poornima was born on May 6, 1980 in a Kerala settled Tamil Pillai family. She is the daughter of Mohan and Shanthi. She has a younger sister Priya Mohan, who is also an actress. She has been married to actor Indrajith Sukumaran since 2002. They have two daughters, Prarthana and Nakshatra. 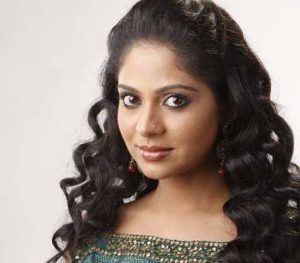 Poornima Indrajith Facts:
*Her father is a practicing lawyer and mother runs a dance school.
*She has served as the host of the shows Pepsi Top Ten and Kadha Ithu Vare.
*Her younger sister is actress Priya Mohan.
*Follow Poornima on Facebook and Instagram.