Melissa Rauch is an American actress and comedian who is most famous for her portrayal of Dr. Bernadette Rostenkowski-Wolowitz on the CBS sitcom The Big Bang Theory since 2009. Melissa was born as Melissa Ivy Rauch in Marlboro, New Jersey, to Jewish family. Her parents are David Rauch and Susan Rauch, and has a brother named Ben. She has been married to writer Winston Rauch. 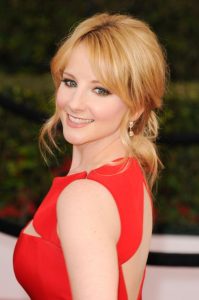 Melissa Rauch Facts:
*She met her future husband, Winston Beigel in college.
*She developed an interest in acting while studying in high school.
*Her husband Winston Beigel co-wrote several scripts with her.
*She was ranked #64 on Maxim’s “Hot 100” of 2014 list.
*She likes to do cooking, yoga, biking, reading, playing baseball, and kickboxing.
*Follow Melissa Rauch on Twitter, Facebook and Instagram.