Marcos Rojo is an Argentine professional football player who plays as a defender for Premier League club Manchester United and the Argentina national team. He also previously played for Estudiantes LP, Spartak Moscow and Sporting CP. Rojo was a part of the Argentine national team which reached the 2014 FIFA World Cup Final, and was the only Argentine included in the Castrol Performance Index Team of the Tournament. He was also a Copa América runner-up in 2015 and 2016 and took part at the 2018 FIFA World Cup. 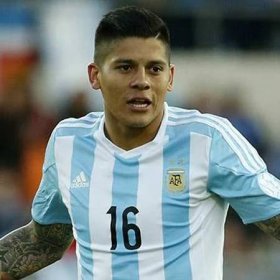 Marcos Rojo Facts:
*He was born on March 20, 1990 in La Plata, Argentina.
*His full name is Faustino Marcos Alberto Rojo.
*He began his career at local club Estudiantes de La Plata at the age of ten.
*He debuted professionally for Estudiantes de La Paz in 2008.
*He became a member of the Argentine national team in 2011.
*He is married to Eugenia Lusardo.
*He has two daughters.
*He has a number of tattoos, including the English words “Pride” and “Glory” on each thigh.
*Follow him on Facebook and Instagram.