Maren Morris is an American country music singer and songwriter, best known for her debut single “My Church”, which peaked at number one on the Country Digital Songs chart in 2016 and reached number five on the Hot Country Songs chart and won a Grammy Award for Best Country Solo Performance. Her debut major-label album, Hero, was released in 2016 and debuted on top of the Billboard Top Country Albums chart. Her third single, “I Could Use a Love Song”, hit number one on the US Country Airplay chart in 2017. Born Maren Larae Morris on April 10, 1990 in Arlington, Texas, to parents Greg and Kellie Morris, she has a younger sister named Karsen. Maren began her music recording career in 2005, with her debut studio album, Walk On, via Mozzi Blozzi Music. She graduated in 2010 from the University of North Texas. She married fellow country singer Ryan Hurd on March 24, 2018. They have a son together. 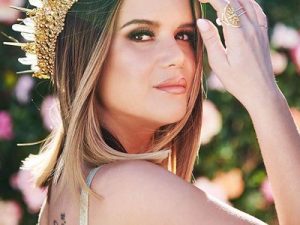 Maren Morris Facts:
*She was born on April 10, 1990 in Arlington, Texas.
*She spent most of her time at her parents’ hair salon as a child.
*At 11, she started singing in clubs and at parties.
*Her 2015 extended play, Maren Morris, charted on two Billboard charts.
*Her debut single “My Church” topped the Country Digital Songs list.
*She began dating American country singer Ryan Hurd in 2015.
*She became engaged to Ryan Hurd in July 2017. The couple married in March 2018 in Nashville, Tennessee.
*Visit her official website: www.marenmorris.com
*Follow her on Twitter, YouTube, Facebook and Instagram.