Maria Takagi is a Japanese television and movie actress and a former adult video star who debuted as an adult video actress with the December 2002 release Super-Star for the Max-A Calen label. Takagi was a regular on the Tokai TV drama Keiyaku Kekkon, as the “femme fatale” Keiko Tokumaru, during its July to September 2005 run, and also on the Fuji TV hospital series Ns’ Aoi playing the part of Nurse Nishi Tomoko from January to March 2006. In September 2007, she starred as Kasumi in the TV Asahi drama Kuroi taiyō ’07 Supesharu, a TV special movie based on the Kuroi taiyō TV series. In 2009, Maria appeared in Ju-on: Black Ghost, part of the long running Japanese Ju-on horror film series known in English as The Grudge, and had a major role in the 2015 film Shinda Me o Shita Shonen, a youth drama based on the manga of the same name by Tomohiro Koizumi. 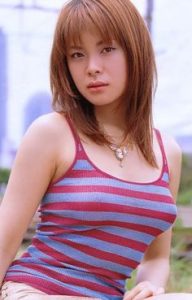 Maria Takagi Facts:
*She was born on October 25, 1978 in Chiba Prefecture, Japan.
*She used the names Rika Inoue and Yukiko Hara early in her career as a model.
*She played Kasumi in the TV Asahi drama Kuroi taiyō ’07 Supesharu (黒い太陽 ’０７ スペシャル) in September 2007.