Marianna Palka is a Scottish actress, producer, director, and writer who wrote, directed and starred in amazingly reviewed Good D***, which screened at the 2008 Sundance Film Festival. From 2017 to 2019, Palka appeared as Reggie ‘Vicky the Viking’ Walsh in the Netflix series G.L.O.W. Palka’s other notable works include Same, Always Worthy, B**** (2017) and Egg. She produced and was the subject of a documentary called The Lions Mouth Opens which earned an Emmy nomination. 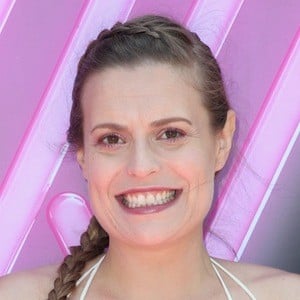 Born Marianna Bronislawa Barbara Palka on September 7, 1981 in Glasgow, United Kingdom, Palka moved to New York City at age 17 to study at the Atlantic Theater Company. From October 1999 to 2013, Palka was in a relationship with American actor and producer, Jason Ritter.

Marianna Palka Facts:
*Born on September 7, 1981 in Glasgow, United Kingdom, she has a sister named Nina.
*She is of Polish descent.
*Her first name Marianna is originally a diminutive of Hebrew name Maria, and her second name Bronislawa is derived from Slavic pagan names used in the early Middle Ages by Slavs.
*She moved to New York when she was 17.
*She is close friends with Seth Gabel and Bryce Dallas Howard.
*She divides her time between Los Angeles, California and Glasgow, Scotland.
*Visit her official website: www.mariannapalka.com
*Follow her on Twitter, Facebook and Instagram.