Actor Mark Wahlberg is best known for his roles as Vincent “Vince” Francis Papale in the 2006 film Invincible, Sgt. Sean Dignam in the 2006 film The Departed, Micky Ward in the 2010 film The Fighter, and the title character in the 2008 film Max Payne. He has also starred in Planet of the Apes, The Italian Job, Boogie Nights, Ted, Transformers: Age of Extinction, Daddy’s Home and Lone Survivor. His career was began as a rapper and got famous by the name “Marky Mark” in 1991. He was the frontman of the hip-hop band Marky Mark and the Funky Bunch. Mark was born Mark Robert Michael Wahlberg in Dorchester, Boston, Massachusetts, on June 5, 1971 to Alma Elaine and Donald Edward Wahlberg. He has eight siblings including, Arthur Wahlberg, Donnie Wahlberg and Robert Wahlberg. He has been married Rhea Durham since 2009. They have four children; Brendan Joseph, Grace Margaret, Ella Rae, and Michael Wahlberg. 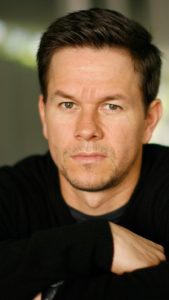 Mark Wahlberg Facts:
*He is the youngest of nine children.
*He was ranked #1 in “Hottest Hotties of the 90’s” list by VH1.
*He was ranked #65 on VH1’s 100 Sexiest Artists.
*One of People magazine’s 50 Most Beautiful People in the World (1992).
*He has four tattoos on his body – on upper left arm, upper right arm, ankle, around neck and a tattoo of Bob Marley on his left shoulder.
*He was a drug dealer as a young teenager.
*He has stated that he struggled with weight gain his whole life.
*Highest paid actor of 2017, earning $68 million.
*Follow him on Twitter, Facebook, Goolge+ and Instagram.