Mary Hart is an American television personality best known for her work on Entertainment Tonight (1982-2011), which is the longest running entertainment magazine show of all time. She competed in the 1970 Miss America pageant, and finished in the Top 10. Mary was born on November 8, 1950 as Mary Johanna Harum in Sioux Falls, South Dakota, to Dorothy and Robert Harum. She has two brothers, Michael and David. She married Burt Sugarman in 1989. They have one child. She was married to Terry Hart from 1972 to 1979. 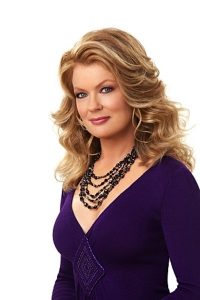 Mary Hart Facts:
*She is fluent in Danish and Swedish.
*She competed in Miss America as Miss South Dakota, placing in the top-10.
*She was a semi-finalist in the Miss America 1971 pageant.
*Her mother, Dorothy Harum, is a breast cancer survivor.
*Follow her on Twitter.