American magician who won the ninth season of America’s Got Talent. He was the first magician to win the competition show. He is recognized for his combination of humor and shocking magic. Born on May 10, 1988 in Johnston, Rhode Island to American parents, Franco was raised with his older brothers. While growing up, he learned magic by watching magicians on TV. After graduating from Johnston High School in 2006, he attended and graduated from University of Rhode Island, where he received a degree in Business Administration with a minor in Communication Studies. He was in a long-term relationship with Tianna Scartabello. He currently resides in Las Vegas, Nevada. 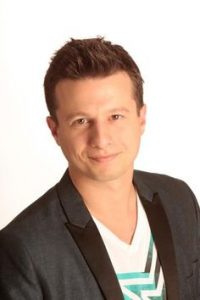 I’ll take five hundred over five dollars any day of the week. 💸 #TBT to #VineVideos

Mat Franco Facts:
*He was born in Johnston, Rhode Island on May 10, 1988.
*He was educated at Johnston High School and attended University of Rhode Island.
*He is the first magician to win the competition America’s Got Talent.
*Currently, he resides in Las Vegas, Nevada.
*He stands 5 feet 11 inches tall and weighs 165 pounds.
*Visit his official website: www.matfranco.com
*Follow him on Twitter, Facebook and Instagram.