Matt Lanter is an American actor. He is best known for his role as Liam on the television series 90210. His notable film credits include Vampires Suck, The Roommate, WarGames: The Dead Code, Disaster Movie and Sorority Row. Since 2016, he has starred in the NBC drama series Timeless. Born Matthew Mackendree Lanter on April 1, 1983, in Massillon, Ohio, he is the son of Jana Burson and Joseph Lanter. He has one sister, Kara Day Lanter. He was educated at Collins Hill High School and iversity of Georgia. In 2009, he began dating Angela Stacey, they married in 2013. They are expecting their first child. 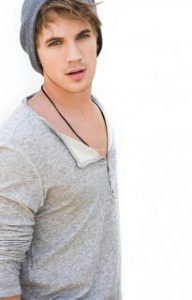 Matt Lanter Facts:
*He is a model-turned-actor.
*His parents divorced when he was a senior in high school.
*He is best friends with Sara Paxton and Nina Dobrev.
*While growing up, he used to play baseball as well as golf and football.
*Follow him on Twitter, Facebook and Instagram.