Matthew Espinosa is an American actor and social media star who rose to fame with 6-second videos on the video-sharing application Vine. He is a member of the social media group, Magcon Boys alongside Aaron Carpenter, Shawn Mendes, Taylor Caniff, Jack Gilinsky, Jacob Whitesides, and Jack Johnson. He also starred in the 2016 romantic comedy film, Be Somebody, directed by Joshua Caldwell. Born on July 07, 1997 in Woodbridge, Virginia, to parents Laura and Rafael Espinosa, his siblings are Dylan, Ryan, and Kristen. He attended Bishop Ireton High School, where he played football and lacrosse. 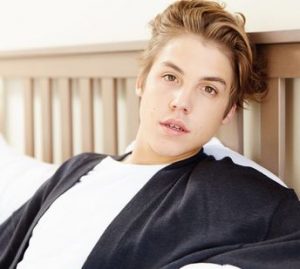 Matthew Espinosa Facts:
*He was born on July 07, 1997 in Woodbridge, Virginia, USA.
*He has three siblings, two brothers, Dylan and Ryan, and a sister, Kristen.
*Member of the social media group Magcon Boys, a group of social media stars.
*In 2016, he appeared in the romantic comedy film, Be Somebody.
*He stands 5 feet 11 inches tall and weighs 145.5 pounds.
*Follow him on Twitter, Tumblr, YouTube, Facebook and Instagram.