Matthew Perry is a Canadian-American actor. He is best known for his portrayal of Chandler Bing on the NBC sitcom Friends from 1994 to 2004. He has also played prominent roles in the films Getting In, Call Me Anna, Fools Rush In, Serving Sara, She’s Out of Control, 17 Again and The Ron Clark Story. For his performance in the TV movie The Ron Clark Story, he received Emmy and Golden Globe nominations. Born Matthew Langford Perry on August 19, 1969 in Williamstown, Massachusetts, to Suzanne and John Bennett Perry, he was raised in Ottawa, Ontario. His parents divorced and his mom subsequently married broadcast journalist Keith Morrison. He belongs to English, Irish, German, Swiss-German and French-Canadian descent. He was in a relationship with actress Lizzy Caplan from 2006 to 2012. He previously dated Lauren Graham and Julia Roberts. 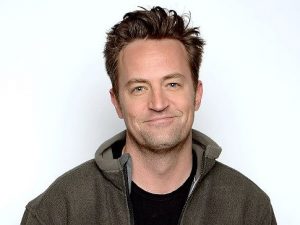 Matthew Perry Facts:
*He was born in Williamstown, Massachusetts, and raised in Ottawa, Ontario.
*He has dual US and Canadian citizenship.
*He became a top-ranked junior tennis player as a teenager.
*He is a big fan of Toronto Blue Jays.
*He is close friends with Bradley Whitford and Hank Azaria.
*Follow him on Twitter and Facebook.