Megan Good is an American actress of film and television. She is known for her roles in television, such as Californication, Deception, Cousin Skeeter, Raising Dad, and Minority Report, and in the films Think Like a Man, The Cookout, The Love Guru, Anchorman 2: The Legend Continues and the 2017 Deuces. For her performance as Cisely Batiste in the 1997 film Eve’s Bayou, she was nominated for a YoungStar Award for Best Performance by a Young Actress in 1998. Born Meagan Monique Good on August 8, 1981, in Panorama City, Los Angeles, to Doris Tyra Doyle and Leon Good, Meagan was raised in Santa Clarita. She has a brother Colbert and two sisters, La’Myia and Lexus. She began acting in commercials at age four. Her first television role was in the series Gabriel,s Fire, and made her film debut as Kid #2 in Friday. She has been married to DeVon Franklin since 2012. 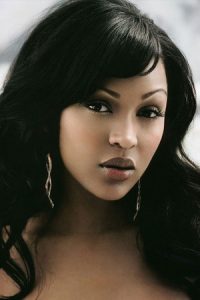 Meagan Good Facts:
*She was born in Panorama City, Los Angeles and grew up in Santa Clarita.
*She commenced her acting career at the age of 4.
*She attended high school with Heather Lauren Olson and Lauryn Nicole Hamilton.
*She has known actor Columbus Short since they were 10 years old.
*She was a fan of Usher and Justin Timberlake in her teens.
*She is best friends with Ty Hodges, and friends with Tyrese Gibson, Adrienne Houghton, Jamie Foxx, and Israel Houghton.
*Visit her official website: www.meaganmgood.com
*Follow her on Twitter, Facebook and Instagram.