Sarah Silverman is an American stand-up comedian, actress, producer, and writer. She is most famous for her satirical comedies on the topics, such as racism, sexism, politics, and religion. She starred in and produced The Sarah Silverman Program from 2007 to 2010, for which she was nominated for a Primetime Emmy Award for Outstanding Lead Actress in a Comedy Series. Silverman’s other notable works include A Million Ways to Die in the West, I Smile Back, Saturday Night Live, Heartbreakers, Peep World, Masters of Sex, and Battle of the Sexes. She released her first book, a memoir called The Bedwetter: Stories of Courage, Redemption, and Pee in 2010. The book was a New York Times Best Seller. Born Sarah Kate Silverman on December 1, 1970 in Bedford, New Hampshire, to Donald Silverman and Beth Ann O’Hara, she was raised in Manchester, New Hampshire. After graduating from The Derryfield School in Manchester, New Hampshire, she attended New York University, but dropped out to pursue a career in comedy. In 1993, she joined NBC’s live television sketch comedy series Saturday Night Live as a writer and featured performer, but only lasted a year. She was in a relationship with Jimmy Kimmel (2002–2009), Kyle Dunnigan (2011-2013), and Michael Sheen (2014–2017). 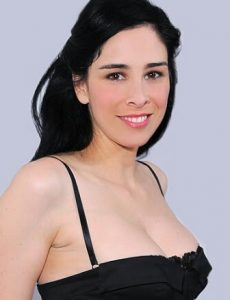 Sarah Silverman Facts:
*She was born on December 1, 1970 in Bedford, New Hampshire and grew up in Manchester, New Hampshire.
*She is the youngest child in her family.
*She is of Polish Jewish and Russian Jewish heritage.
*She is a 1988 graduate of the Derryfield School.
*She attended one year of New York University.
*She began her career in 1992.
*She won two Primetime Emmy Awards for her work on television.
*She is a vegetarian and non-alcoholic.
*She can plays acoustic guitar.
*She was ranked #29 on the Maxim magazine Hot 100 of 2007 list.
*In 2002, Maxim Magazine ranked her #74 in their list of “Hot 100 of 2002” supplement.
*Her favorite film is the 1978 comedy film The One and Only.
*She is friends with Tig Notaro, and Bill Maher, and best friends with Kate Beckinsale.
*Follow her on Twitter, Myspace, YouTube, Facebook and Instagram.