Meesha Shafi is a Pakistani actress, model and singer. She is best known for her film debut as Bina Khan in the 2013 Mira Nair’s film The Reluctant Fundamentalist. Shafi played Laxmi in Bilal Lashari’s action thriller film Waar (2013), alongside Shaan Shahid. She also played Perizaad in the Bollywood film, Bhaag Milkha Bhaag in 2013. As a singer, Shafi started her career with the band Overload with her husband, but left in 2011. She sang along with the internationally acclaimed folk singer Arif Lohar on Coke Studio Pakistan Season 3, with the song “Alif Allah (Jugni)”. Born Meera Shafi on December 1, 1981 in Lahore, Pakistan, to parents Saba Hameed and Pervaiz Shafi Syed, she has two brothers named Faris and Ali. Shafi made her screen debut with the 2006 serial Muhabbat Khawab Ki Soorat on Hum TV, and appeared in Geo TV serial Ye Zindagi To Woh Nahi in 2007. She is married to music producer/guitarist and fellow ex-Overload band member, Mahmood Rahman. They have two children, a son named Kazimir, and a daughter named Janevi. 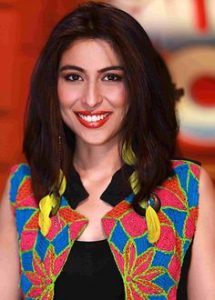 Meesha Shafi Facts:
*Born on December 1, 1981 in Lahore, Pakistan, belongs to a family of writers, actors and painters.
*She is the daughter of veteran actress Saba Hameed.
*Her grandfather, Hamid Akhtar, was a novelist and newspaper columnist.
*One of the few actresses to have acted in Lollywood, Hollywood and Bollywood.
*She made her film debut with Mira Nair’s 2012 Hollywood film, The Reluctant Fundamentalist.
*She and Mehmood are both ex-members of the Pakistani rock band Overload.
*She was named among the 100 most influential people in Pakistan by international franchise Hello magazine in 2013.
*Visit her official website: www.meeshashafi.net
*Follow her on Twitter and Instagram.