Megan Young is a Filipino-American actress, model, TV Host, and beauty pageant titleholder who was crowned Miss World Philippines 2013 and Miss World 2013. She is the first Filipina to be crowned as Miss World. Young is known for her roles in television, such as Kokey, Rubi, Mana Po, Hiyas, Marimar, Alyas Robin Hood, and The Stepdaughters, and in the films Say That You Love Me, Babe, I Love You, The Reunion, and Enteng Ng Ina Mo. Born Megan Lynne Young on February 27, 1990 in Alexandria, Virginia, USA, to parents Calvin and Victoria Young, her mother is a Filipina from Pandan, Antique, and her father is an American. Her younger sister Lauren Young is also an actress. When Megan was ten years old, she moved to Castillejos, Zambales, Philippines along with her family. She studied at the Regional Science High School III from 2002 to 2005, and studied filmmaking at De La Salle-College of Saint Benilde. Her first television appearance was in 2004 as an avenger in Starstruck. She made her film debut as Anna in Say That You Love Me in 2005. In 2012, she began dating model and actor Mikael Daez. 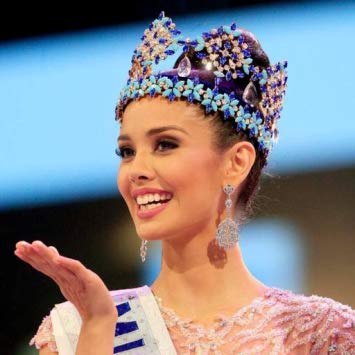 Megan Young Facts:
*She was born on February 27, 1990 in Alexandria, Virginia, USA.
*She was born to an American father and a Filipina mother.
*She is the elder sister of actress Lauren Young.
*Her family moved to Philippines when she was 10.
*She is the first Filipino woman to win Miss World.
*In September 2012, she was named the UN Peace Ambassador.
*She is very fond of eating Japanese dishes.
*Follow her on Twitter, Facebook and Instagram.