Mike Krzyzewski is an American college basketball coach who has served as the head men’s basketball coach at Duke University since 1980. He has led the Blue Devils to five NCAA Division I titles, 12 Final Fours, 15 ACC Men’s Basketball Tournament championships, and 13 ACC regular season titles. Krzyzewski also coached the US men’s Olympic basketball team to gold in 2008 and 2012. Born Michael William Krzyzewski on February 13, 1947 in Chicago, Illinois, to parents Emily and William Krzyzewski, he is of Polish descent. He has been married to Mickie Krzyzewski since June 4, 1969. They have three daughters named Debbie, Jamie and Lindy. 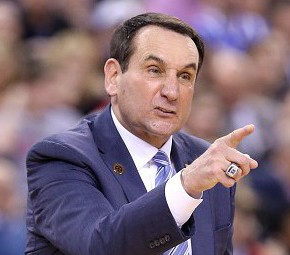 Mike Krzyzewski Facts:
*He was born on February 13, 1947 in Chicago, Illinois, USA.
*He graduated from West Point in 1969.
*He was a point guard at Army from 1966 to 1969 under coach Bob Knight.
*He became the head coach of Duke University in 1980.
*He has led the Duke to five NCAA basketball titles in 1991, 1992, 2001, 2010 and 2015.
*He was inducted into the National Polish-American Sports Hall of Fame in 1991.
*He was elected to the Basketball Hall of Fame in 2001.
*He was inducted into the College Basketball Hall of Fame in 2006.
*He holds the NCAA Division 1 record for most wins.
*Among men’s college basketball coaches, only UCLA’s John Wooden has won more NCAA championships with a total of 10.
*Visit his official website: www.coachk.com
*Follow him on Facebook.