Millie Bobby Brown is an English actress. She is best known for her portrayal of Eleven on the Netflix science fiction drama series Stranger Things, for which she earned a Primetime Emmy Award nomination for Outstanding Supporting Actress in a Drama Series in 2016. She played Madison Russell in the 2019 blockbuster film Godzilla: King of the Monsters and starred in and produced the 2020 mystery film Enola Holmes. She was featured in the music video for “Girls Like You” by Maroon 5. Born on February 19, 2004 in Málaga, Andalucía, Spain, to English parents Kelly and Robert Brown, her family moved to Bournemouth before she was five. Brown has one brother named Charlie, and two sisters named Ava and Paige. She has dated Jacob Sartorius, Romeo Beckham and rugby player Joseph Robinson. 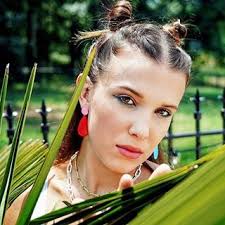 Millie Bobby Brown Facts:
*She was born on February 19, 2004 in Málaga, Andalucía, Spain.
*She starred as Eleven on the hit Netflix series Stranger Things.
*She is the youngest person ever to feature on TIME 100 list.
*She is deaf in one ear.
*She is best friends with Maddie Ziegler.
*She is childhood friend of Zahara Jolie-Pitt and Shiloh Jolie-Pitt.
*She is huge fan of Nicki Minaj.
*She is a supporter of English football club Liverpool FC.
*Follow her on Twitter, YouTube, Facebook and Instagram.