Shannon Woodward is an American actress. She is best known for starring as Sabrina Collins on the FOX sitcom Raising Hope, Elsie Hughes on the HBO science-fiction thriller series Westworld, and Dina in The Last of Us Part II. She has also appeared in such television shows as The Drew Carey Show, Grounded for Life, ER, Malcolm in the Middle, Criminal Minds, Crossing Jordan, An Emmy for Megan, Without a Trace, Psych, and Boston Public. She has also played prominent roles in the films The Haunting of Molly Hartley, The Shortcut, Girlfriend, Adult World, Search Party, and The Breakup Girl. Born Shannon Marie Woodward on December 17, 1984 in Phoenix, Arizona, Woodward was educated at Olympic Heights Community High School in Boca Raton. She started her acting career on the Nickelodeon series Clarissa Explains it All. From 2008 to 2011, Woodward was in a relationship with actor Andrew Garfield. She was previously in a relationship with actor David Gallagher from 2004 to 2005. 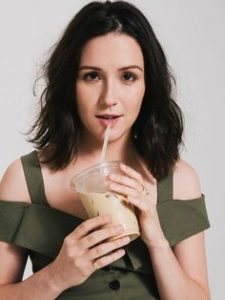 Shannon Woodward Facts:
*She was born on December 17, 1984 in Phoenix, Arizona, USA.
*From 2010 to 2014, Woodward starred as Sabrina on Fox’s comedy Raising Hope.
*In addition to acting, she plays guitar and sings.
*She learned to play violin as a child.
*She is a supporter of Planned Parenthood.
*She is best friends with singer Katy Perry.
*Follow her on Twitter and Instagram.