Molly Malaney is an American reality television personality, best known for her participation in season 13 of the ABC reality television show The Bachelor. She was the runner-up. Born Molly Elizabeth Malaney on March 20, 1984 in Michigan, United States, to parents Maryann and Mike Malaney, she has one sister named Katie. Malaney graduated from Indiana University with a Bachelor’s degree in Communication & Culture. On February 27, 2010, Malaney married her boyfriend of 13 months Jason Mesnick following a 4-month-long engagement. Their daughter, Riley Anne Mesnick, was born on March 14, 2013. She also has a step-son named Tyler Mesnick (b.2005). 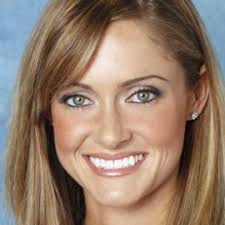 Molly Malaney Facts:
*She was born on March 20, 1984 in Michigan, United States.
*She was a contestant on the 13th season of The Bachelor.
*She was the runner-up.
*Her husband, Jason Mesnick, is a residential real estate agent.
*Visit her official website: www.mollymesnick.com
*Follow her on Twitter, Facebook and Instagram.