Lebanese singer Myriam Fares was born in Sidon District, Lebanon on May 3, 1983. She rose to fame after taking first place at Studio El Fan 2000. She has released five albums and set records on the music streaming service Anghami for most played artist and most played album for her fifth album Aman. Her single hits include “Ana wil Shoq”, “Haklik Rahtak”, “Mouch Ananiya”, and “Bet’oul Eh”. In August 2014, she married her boyfriend of 10 years Danny Mitir. They have a son together. 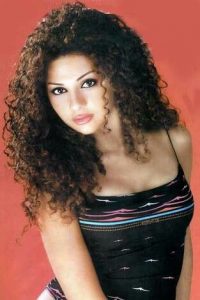 Myriam Fares Facts:
*She began learning classic ballet at the age of 5.
*She made her acting debut in the film Itiham which was released in 2014.
*She is the only Arab artist who spread widely and had huge success in different parts of the world.
*Catch Myriam on Twitter, Facebook, YouTube, Google+ and Instagram.