Nadine Labaki is a Lebanese actress and director, best known for the movies Caramel, Where Do We Go Now?, Capernaum, Stray Bullet, Rock The Casbah, and Mea Culpa. Nadine was listed on Variety’s 10 Directors to Watch list at the Sundance Film Festival. Born Nadine Antoine Labaki on February 18, 1974 in Baabdat, Lebanon, in a Maronite family to Antoinette and Antoine Labaki, she is the older sister of costume designer Caroline Labaki. She earned her degree in audiovisual studies in 1997 from Saint Joseph University. She started acting in short films during the early 2000s. In 2003, she began directing music videos for singer Nancy Ajram. In 2006, she directed and starred in the critically acclaimed Lebanese LGBT-themed comedy-drama film, Caramel. In 2007, Labaki married musician and composer Khaled Mouzanar. They have two children. 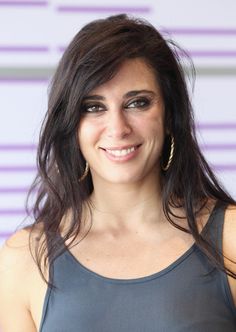 Nadine Labaki Facts:
*She was born on February 18, 1974 in Baabdat, Lebanon.
*She obtained a degree in Audiovisual Studies in 1997 from Beirut’s Saint Joseph University.
*She participated in the Cannes Film Festival Residence to write Caramel in 2005.
*She speaks Arabic, French, English and Italian fluently.
*She received an honorary degree from the American University of Beirut and was the speaker at the 150th Commencement Ceremony (2016).
*Visit her official website: www.nadinelabaki.com
*Follow her on Twitter, YouTube, Facebook and Instagram.