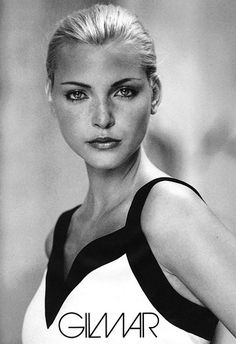 Born on March 19, 1971 in Berlin, Germany, her parents worked as bankers. Auermann was discovered by a model scout while working as a beer garden waitress in Berlin in 1989. She was married to Wolfram Grandezka from 1999 to 2005. She has four children.

Nadja Auermann Facts:
*She was born on March 19, 1971 in Berlin, Germany.
*She was discovered while working at a cafe in her hometown of Berlin in 1989.
*She once held the record for being the model with the longest legs in the world in the Guinness Book of Records.
*She was the international spokesperson of Shiseido in the late 1990s.
*People Magazine named her one of the top 50 Most Beautiful People in the World in 1994.
*She considers Coco Chanel as her style icon.
*Time Magazine named her one of the top 10 People in the World in 1994.
*Fashion designer Valentino once commented on her physical resemblance to Marlene Dietrich.
*She has her own perfume (“Nadja Auermann”).
*She is a vegetarian.
*She enjoys vacationing in the town of Heiligendamm on the Baltic Sea.
*Follow her on Instagram.